Now is not the time to stop thinking about security, especially as the world of cyber only gets more and more complex with every new app that gets added to the mix; add a smattering of CoVid-19 on top of that to make us change the way we work, and suddenly the new situation could make things worse if not careful.

Now is the time to tighten up on security if anything. It would be easy to lose sight of our security amidst the CoVid-19 pandemic and the unusual circumstances that we all find ourselves in.  After all, this  situation is affecting all of us in many ways that no recent generation would have recognised.  Gratefully, one of the things that is holding everything together right now is our IT infrastructure – just imagine if we didn’t even have the option of working from home!?

Remote working is currently the norm for all those who can, so remote collaboration has become particularly important for people to work together effectively.  It seems many organisations – including our government here in the UK – are resorting to the first convenient application available, without giving much thought as to whether the tools are suitable or necessary; nor indeed is there much obvious consideration of the security implications of using tools such as Zoom, for example.  Surprisingly, even our government was quick to use Zoom to hold their initial socially-distanced meetings – a tool deemed not suitable by the UK’s Ministry of Defence.  As it turned out there was a security flaw, which has since been patched, but the question is: how robust and secure is that particular application for serious business use?

Microsoft’s Teams solution is, on the surface, a good idea. It allows for collaboration and, hailing from Microsoft, a reputable business software company, it should be fine to use?  Right?

Well, yes BUT… it is important is to realise what an application like Teams does and how it works.  For starters, it is important to know that it is not a platform or a data store but rather a client that allows access via a single interface to all of the applications that sit behind it:

In addition, Teams has been designed to aid collaboration which has shifted responsibilities away from IT admins, which means that each user can control who gains access to shared data.

How does Teams make all that data accessible?  When a user creates a team, several things happen automatically: 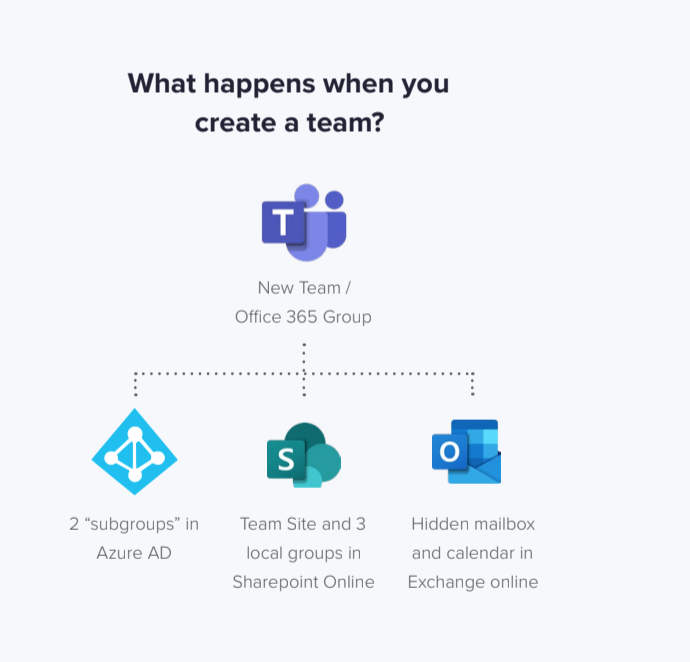 This process is repeated for public and private channels within the team and that is just the beginning!

Once a team is set up, users can continue to expand their collaborative scope, making changes to permission mechanisms without administrative assistance.

Admin nightmare - How can you see who has access to all that data?

In Teams, administrators must also look in multiple places to understand who has access:

Even if you weren’t aware of how Teams works, it should become apparent just how quickly things can become messy.  As well as effectively losing control, admins do not have the level of visibility they should have.  It soon becomes extremely hard to get a grip on what is shared internally, publicly and in the cloud – virtually impossible to keep track of.  IT cannot even see who has access to a Team – from Azure, it is not possible to see people who have been added by a link.  Alongside all of this, Microsoft  is adding features to Teams, giving admins little chance of keeping up with effective administration.

The adoption of Office 365 and Teams is taking off.  Last week there was a surge in use of Teams (an additional 44 million instances just last week) as it integrates so easily with O365.

And remember, creating a Team is a matter of a couple of clicks, naming it and adding users to it.

By the way, how many instances do you expect to have?  A reasonable estimate is that you can probably expect to have at least one Team per user per month.  MS have recently made changes to Teams to allow 2 million per tenant!

Everyone in a Team is an equal, meaning that anyone who is a part of the Team will have access to all of the shared data.

Data Protection: the Elephant in the room.

Your data is already spread out and growing.  It’s getting harder and harder to know where the data is.  Here are some questions worth asking:

It is possible to build access templates behind Teams to control the sharing but in reality, this is unlikely to happen.  Building access templates to create custom permissions behind it will become the bottleneck as templates would have to be created for each instance (remember, how many Teams do you envisage you will have in your environment?).

A way to take control of the situation

It’s hard to protect what you cannot see, but Varonis actually gives admins greater and more extensive visibility of who has access to what and where the data is stored, especially where Teams is concerned.  This is what Varonis is all about.  If you are unfamiliar with Varonis, here are some of the benefits that you will get from using Varonis:

In Varonis, administrators have a single pane of glass to view all of these permissions, and more.  In the scenario below you see the TEAMS site called COMPENSATIONS2 and below it you see folders and a file called Employees Bonuses.xlsx.  On the right you see the permissions for that file: 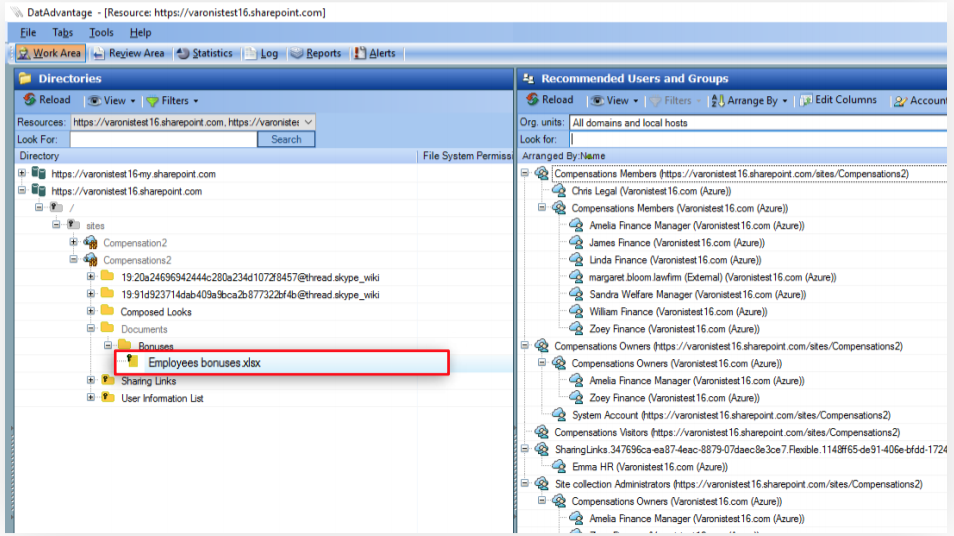 Get Notified for New Blogs:

We post regularly on the platforms below, notifying our audience when we publish new pieces.

All views expressed on this blog are the author’s own and do not represent the opinions of any entity whatsoever with which the author
has been, is now or will be affiliated, inc. this organisation whose website the blog is hosted on, or any partner of this organisation.

This website uses cookies to improve your experience while you navigate through the website. Out of these cookies, the cookies that are categorized as necessary are stored on your browser as they are essential for the working of basic functionalities of the website. We also use third-party cookies that help us analyze and understand how you use this website. These cookies will be stored in your browser only with your consent. You also have the option to opt-out of these cookies. But opting out of some of these cookies may have an effect on your browsing experience.
Necessary Always Enabled
Necessary cookies are absolutely essential for the website to function properly. This category only includes cookies that ensures basic functionalities and security features of the website. These cookies do not store any personal information.
Functional
Functional cookies help to perform certain functionalities like sharing the content of the website on social media platforms, collect feedbacks, and other third-party features.
Performance
Performance cookies are used to understand and analyze the key performance indexes of the website which helps in delivering a better user experience for the visitors.
Analytics
Analytical cookies are used to understand how visitors interact with the website. These cookies help provide information on metrics the number of visitors, bounce rate, traffic source, etc.
Advertisement
Advertisement cookies are used to provide visitors with relevant ads and marketing campaigns. These cookies track visitors across websites and collect information to provide customized ads.
Others
Other uncategorized cookies are those that are being analyzed and have not been classified into a category as yet.
Save & Accept